Our motorized sign is the only neon sign of Curly the Clown available and the only sign with a fully functioning, waving arm. This vintage Dairy Queen neon sign is a real collector’s dream 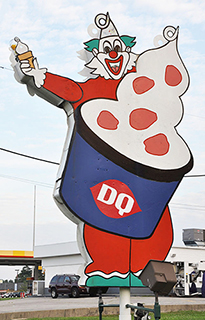 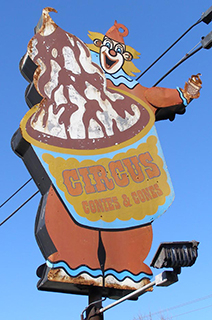 Our original animated Dairy Queen Curly The Clown Neon Sign is completely restored and is not repainted, though it was touched up over the years. We purchased this sign directly from Dairy Queen owners who ran a store for over 30 years.

We restore every one of our vintage signs to museum quality standards and preserve each original item's individual personality. Featuring neon lights on both sides and a fully functional motorized arm, this vintage neon plugs into any standard outlet.

Dairy Queen is an international brand celebrating over 75 years in business. If visiting your local Dairy Queen and enjoying one of their soft serve treats makes you feel a little nostalgic, you’re not alone. Dairy Queen is a hometown, American brand created in the 1940s by Sherb Noble. When two of his friends, the McCulloughs, approached him with their delicious new innovation - soft serve - he immediately tested it out at his ice cream parlor. It proved a huge success. In only two hours, he served 1600 cones to excited customers. Shortly after, Dairy Queen was born. 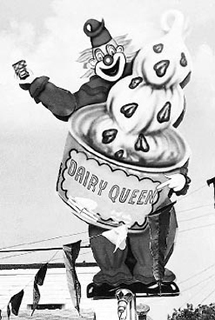 Noble expanded his locations to more than 1,000 by 1950, sparking the interest of several sign companies who were eager to partner up with Noble’s rapidly growing business. One of those companies, the National Animated Sign Co. in Hot Springs, AR, decided to expand on Dairy Queen's mascot at the time by creating a motorized version. The company had just patented a design for waving signs with motorized arms that notified passing cars if a store was open.

The National Animated Sign Co. brought their Curly the Clown sign to a Dairy Queen in Hot Springs in 1951. A large event for children was organized and, on July 11, the local community came out to meet Curly the Clown and see the new animated sign. Though the event was a fun gathering for family and friends, Dairy Queen decided to go in a different direction, and dropped the clown approach, later adapting the name for a different mascot - Curly The Cone.

After 1951, Dairy Queen continued to expand and is now an international company with more than 6,400 stores in over 25 countries. Somewhere in this rapid growth, the history of Curly the Clown became buried. Only one DQ location remained with an original sign. About 80 stores across the United States also displayed a mural of a black and white photo featuring Curly, but with unknown origins.

In 2000, Dairy Queen decided to investigate, and brought the picture to the attention of its loyal customers. One of those customers, Clare Richardson, would eventually discover the history of Curly, his connection to the National Animated Sign Co., and the date and location of the unknown photo - it depicted the opening event for Curly in Hot Springs, AR.

The history of Curly the Clown isn’t quite over, though. When Dairy Queen dropped the idea for a clown mascot, it was picked up by another growing brand in 1960 - McDonald’s. Dairy Queen may well have been the original instigator of one of the most well-known, beloved mascots, Ronald McDonald.