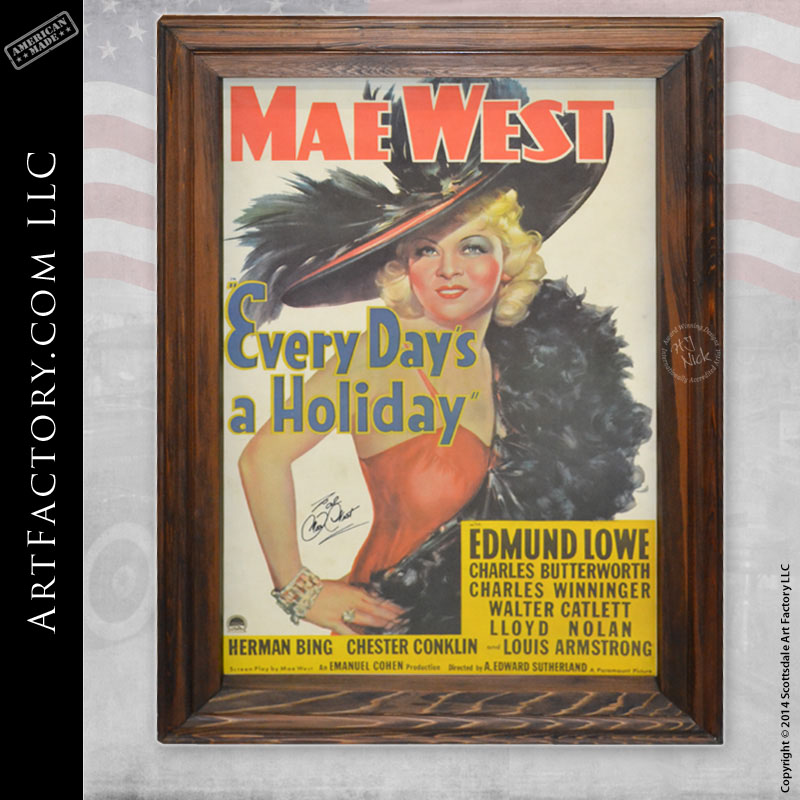 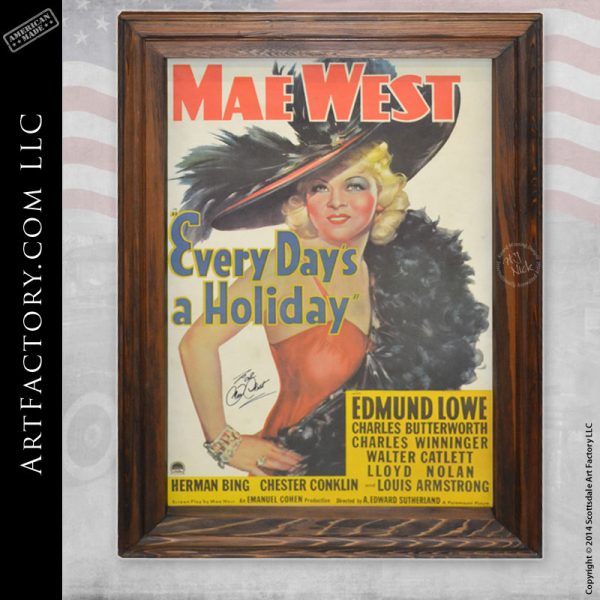 Signed Mae West Movie Poster: Every Day’s A Holiday – VS104

An original SIGNED Mae West movie poster from Every's Days A Holiday from 1937 distributed by Paramount Pictures. Released in December 1937 this movie was both written and starred the famous vaudeville actress Mae West. Directed by A. Edward Sutherland, this comedy also starred actors Edmund Lowe, Charles Winninger, and Charles Butterworth. This was the last film West starred in under her contract with Paramount, and although it did not receive critical acclaim it was nominated for an Academy Award for Best Art Direction from Wiard Ihnen. A custom handcrafted solid cypress wood frame surrounds this 1930s authentic old movie poster.

Mary Jane West, known by her stage name Mae West (1893-1980) was an American actress, singer, playwright and screenwriter whose entertainment career spanned seven decades (1907-1978). At five foot tall she was a commanding presence with her famous hourglass figure and signature walk. Her shapely figure and flawless delivery of innuendo and humorous satire made Mae West a famed sex symbol. She started entertaining at the age of five, and by age fourteen in 1907 she performed professionally in vaudeville in the Hal Clarendon Stock Company as "Baby Mae." She used the alias "Jane Mast" early in her career and as her pen name when she started writing her own risqué plays. Her signature walk was inspired by female impersonators Julien Eltinge and Bert Savoy. In 1926 she starred in her first Broadway play she had written entitled Sex, which she wrote, produced and directed. The theater was raided and she was prosecuted on moral charges, spending eight days incarcerated on Welfare Island (now known as Roosevelt Island) where she states that she dined with the warden and his wife. The media attention she received enhanced her popularity and career.

In 1932, when Mae West was almost forty years old, she was signed with Paramount Pictures, and debuted in her first film Night After Night that same year opposite George Raft. In 1933 she starred in She Done Him Wrong with Cary Grant. Her most successful film, I'm No Angel, also pairing West with Grant was released that same year, earning her the 8th spot on the largest box office actor draw in the US. Every Day's A Holiday (1937) marked the last movie Mae West filmed on her Paramount contract, however she was continued to work being approached by Universal Pictures in 1939. Her first role in 1940 under Universal was opposite W. C. Fields in My Little Chickadee. West continued in the movie industry, on radio, television and Broadway bringing her entertainment to the masses.

Her infamous figure has been the model for many items over the years, from Elsa Schiaparelli's perfume bottles to Salvador Dali's Lips Sofa, and from inflatable life preserver jackets to vintage gas pumps.

Be the first to review “Signed Mae West Movie Poster: Every Day’s A Holiday – VS104” Cancel Reply