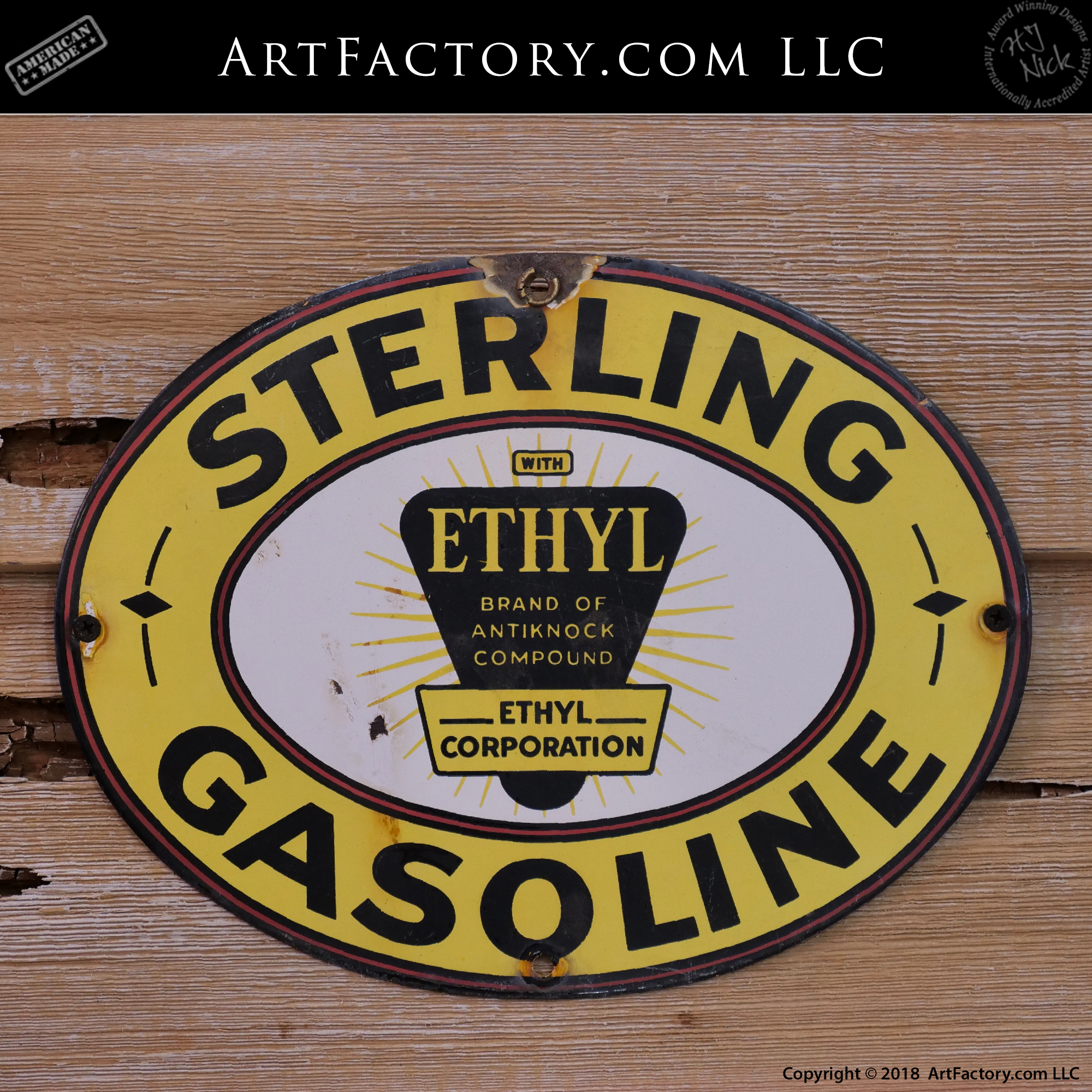 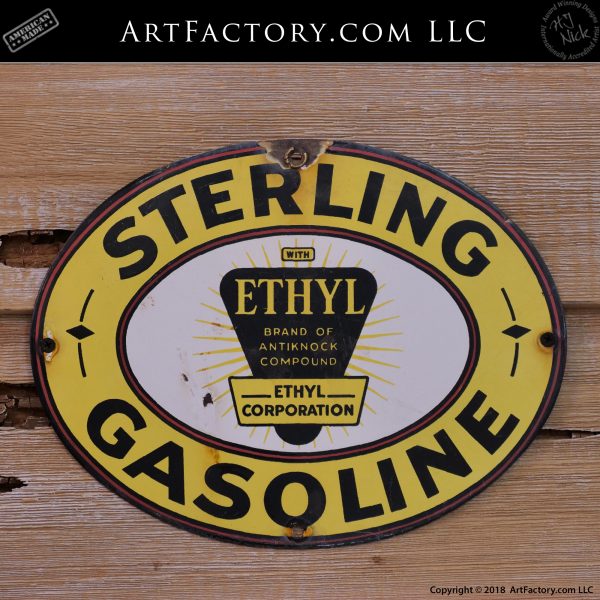 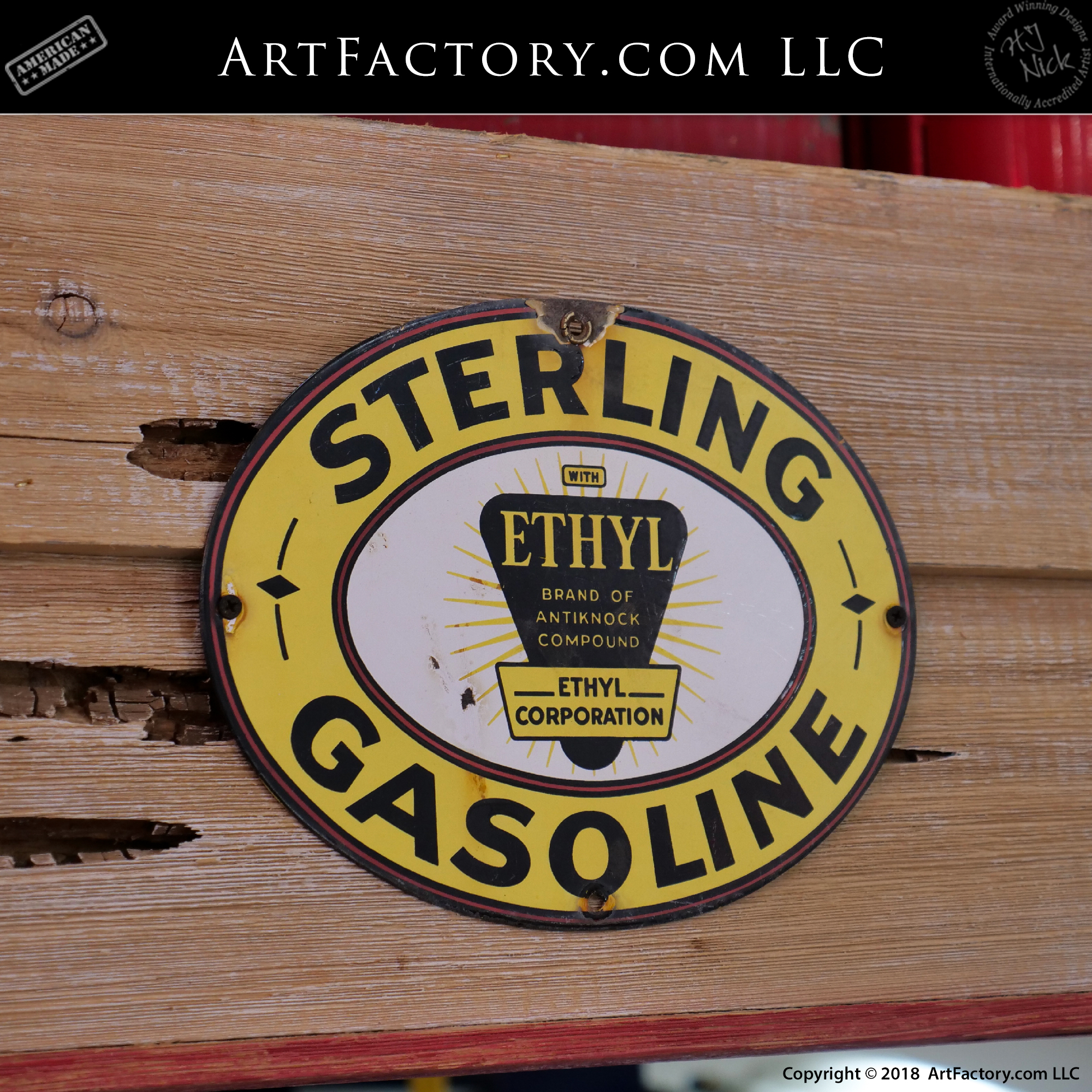 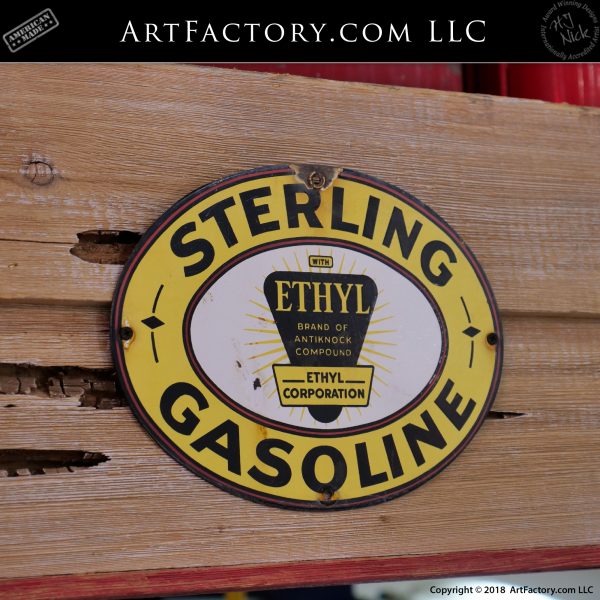 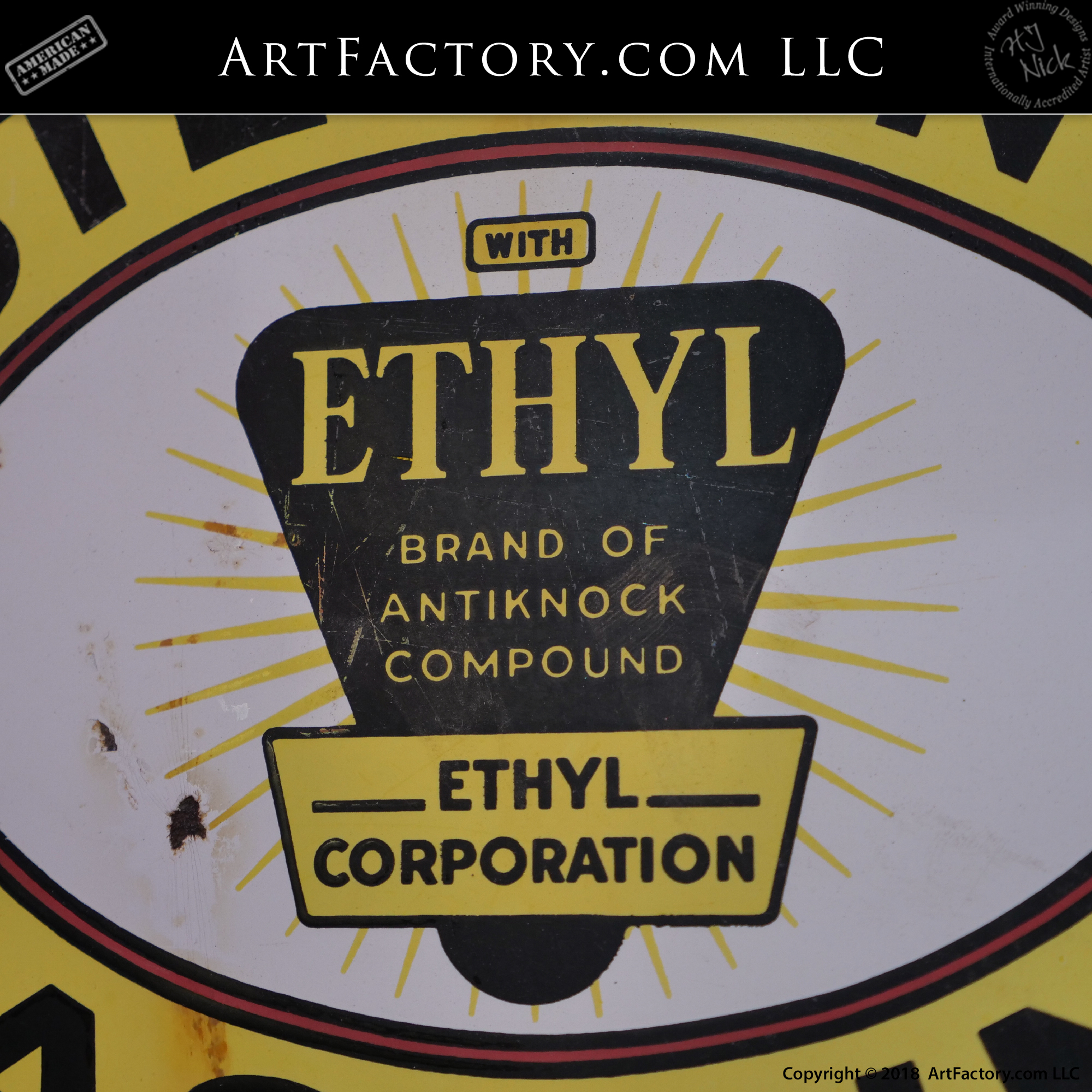 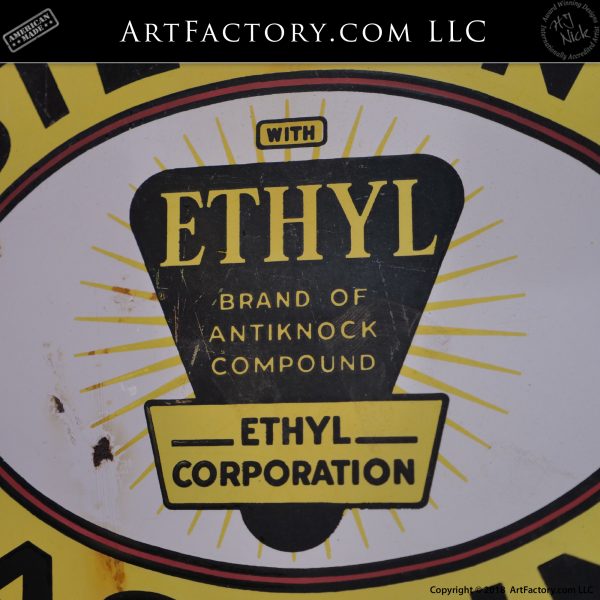 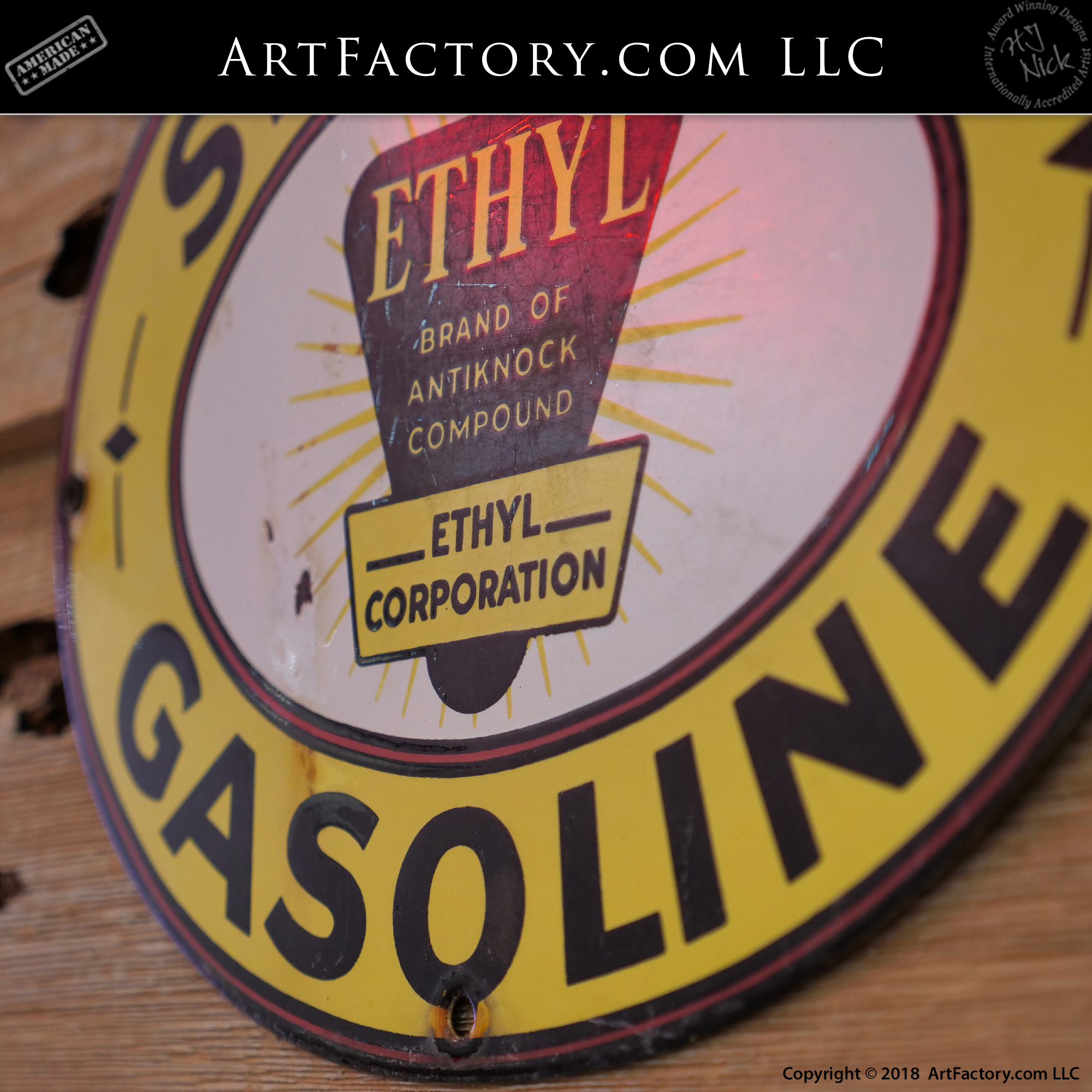 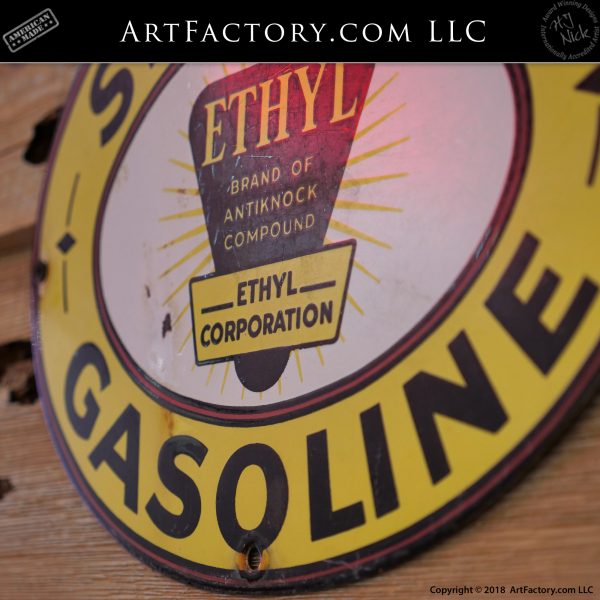 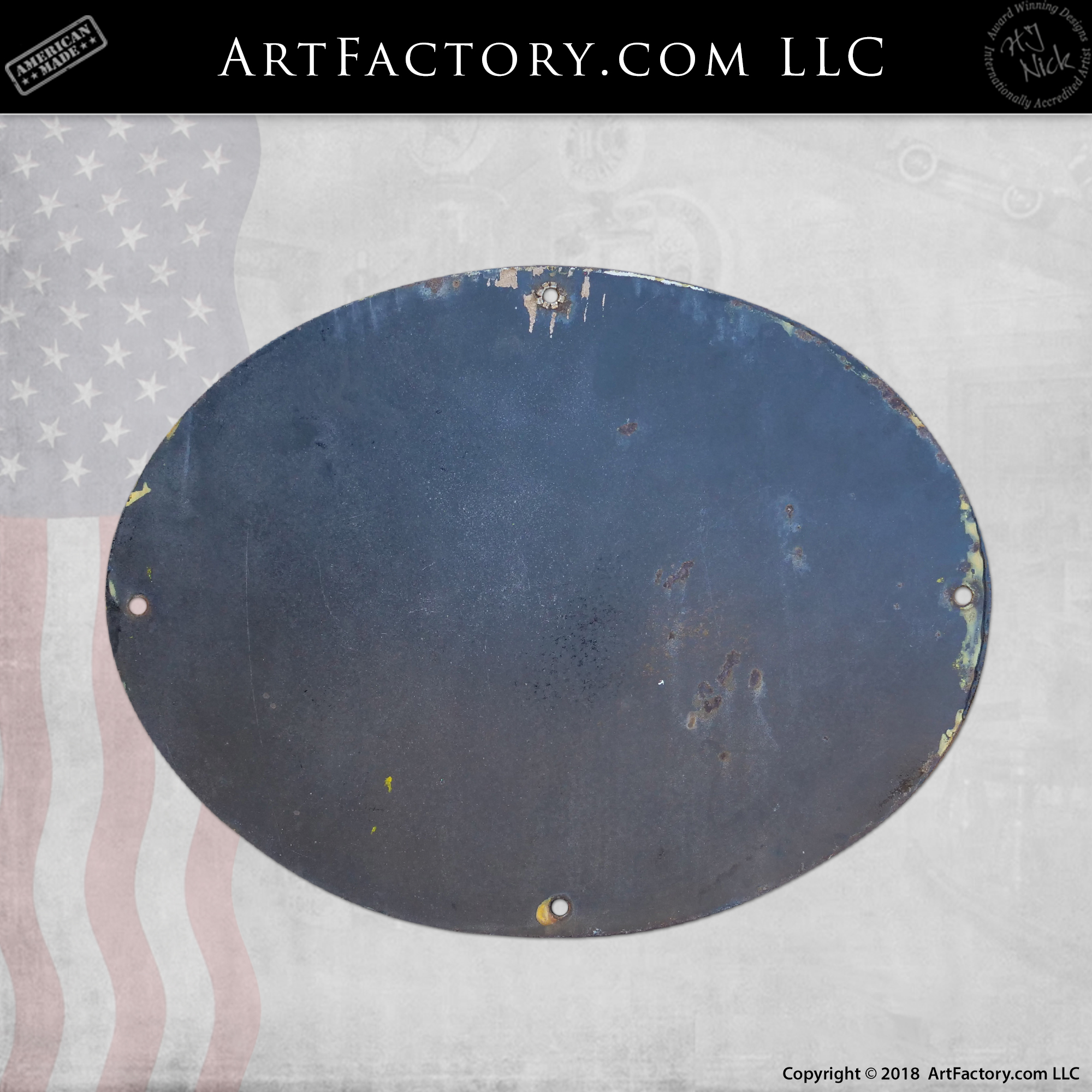 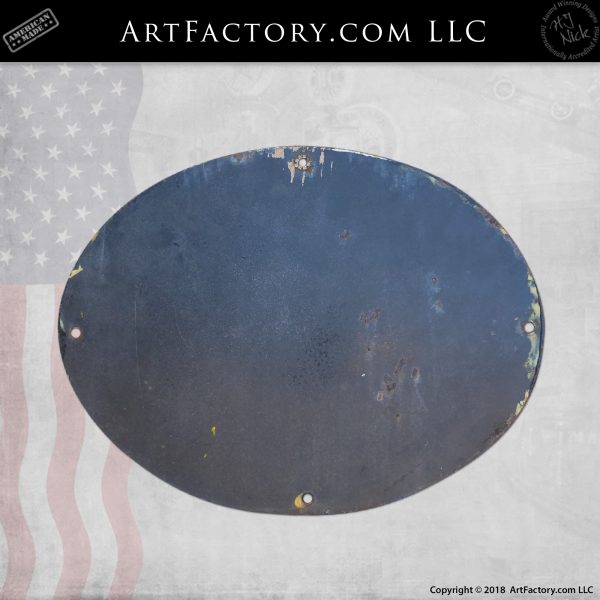 This Rare Original 1930’s Era Porcelain Sign From Sterling Gasoline And Is Just One Of Hundreds Of Collectible Petroliana And Vintage Gas Stations Collectibles We Currently Have In Stock At ArtFactory.com

At ArtFactory.com We Have One Of The Largest Selections Of Original Automobilia For Sale Anywhere

This vintage Sterling Ethyl Gasoline sign is an original, that was manufactured in the 1930's. It is an oblong  shaped, genuine porcelain enamel sign, and measures 11 1/2 inches wide by 8 3/4 inches tall at its widest points. This single sided gas station sign is the perfect display piece if you are looking to make a splash, but have limited wall space, or although it is currently unbent, is of the correct size to be used as the belly plate for a vintage gas pump restoration. It has a yellow background in the outer portion of the sign, and a white background toward the center. There is a series of 3 thin stripes black/red/black around the edges of the sign, and again to create a border separating the yellow area from the white area. The sign reads "STERLING GASOLINE" in black lettering in the yellow area with decorative accent marks separating the words. The white portion has a black and yellow Ethyl Brand Logo that reads "With Ethyl Brand Of AntiKnock Compound/Ethyl Corporation).

This rare, vintage Sterling Ethyl Gasoline sign, is just one of hundreds of investment quality, collectible signs currently for sale at ArtFactory.com. Like all or our signs it is sold in original, unrestored condition as pictured. There are some small rust spots, and some minor dings, but overall is an extremely clean sign face, for an item that is now nearly 90-years-old. We do not believe in restoring old signs because it is our belief that any dings, dents, and blemishes are part of that item's unique history. All of our collectible petroliana advertisements are guaranteed to be authentic, original items. This guarantee is backed by over a century of experience in the antiques and collectibles marketplace. It is a piece of original memorabilia, from one of America's most iconic brands. We are a one stop shop when it comes to outfitting your man cave or game room. We can can outfit an entire gas station or automotive themed room for you, or help you find that one special item that has been missing from your collection. In addition to collectible signs, we have vintage visible gas pumps, oil pumps, lubesters, and more, that we have fully restored to working, museum quality condition. Our petroliana restorations are the best in the business because nobody has been doing it longer, or pays as much attention to detail.

This genuine porcelain, vintage Sterling Ethyl Gasoline sign is just one of hundreds of original, collectible automobilia and petroliana items currently for sale at ArtFactory.com. Like all of our vintage collectible signs, it is guaranteed authentic, investment quality memorabilia. We specialize in those hard to find signs that serious collectors are looking for. All antique collectables offered are genuine memorabilia and appreciable assets, not fake reproductions. All items are fine collectable art at the highest world class collector level. Contact us for pricing on this vintage Sterling Ethyl Gasoline sign, or any of our collectible Americana, antique signs, old gas pumps, and classic collectables at 1-800-292-0008.

Was an American oil company founded in 1911 in Humble, Texas. In 1919, a 50% interest in Humble was acquired by Standard Oil of New Jersey which acquired the rest of the company in September 1959 and merged with its parent to become Exxon Corporation in 1973.

The Humble Oil Company was chartered by Walter Fondren Sr., and brothers Ross Sterling and Frank Sterling, in February 1911. They were joined by their sister, Florence M. Sterling, who became assistant, and then later full secretary and treasurer of the company. The three siblings were often referred to as the "Trio."

On June 21, 1917, the company was re-organized as Humble Oil and Refining Company and incorporated with a capitalization of $1 million. William Stamps Farish II (1881–1942), was the primary organizer. Farish served as vice president for five years and in 1922, he became the president of Humble Oil and Refining Co. In 1933, he became chairman of the board of Standard Oil Company of New Jersey (later Exxon Company), which held substantial stock interest in Humble, and in 1937, he became president of Standard. 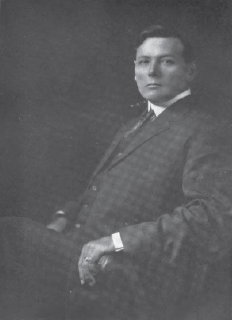 Was an American oilman and oil industry businessperson, based in Houston, Texas. Sterling and his brothers grew up on Double Bayou in Chambers County, southern Texas. They were ambitious and built a sail boat to carry vegetables to Galveston for sale. Frank Sterling was one of nine founders of the Humble Oil & Refining Company of Houston, Texas in 1911. Their first wells were in the Humble, Texas area. Frank Sterling, who was a post-production expert, became a Vice President of Humble in 1921. 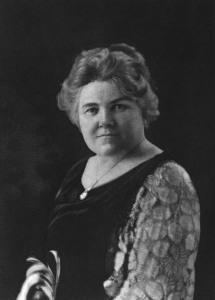 Was an American businesswoman, journalist and early feminist. Sterling served as treasurer and secretary of her family's business venture, Humble Oil, and also for various community services in Houston. She was the founder of the Woman's Viewpoint.

She worked for the R.S. Sterling and Company as a bookkeeper and as secretary and treasurer in 1913. At the same time, Sterling became the assistant and then later, full treasurer and secretary of the Humble Oil Company. She signed checks for the business as "F.M.Sterling," hiding her gender. She also was the secretary and treasurer of the Sterling Investment Company. During World War I, she was a member of the executive board of the Houston Red Cross. She also worked as treasurer of the Houston War Camp Community Service. She never married, devoting herself to various causes all her life.

Sterling was active in women's rights in Texas. She was elected the second vice-president of the Texas branch of the National Woman's Party in 1916. She was involved with the Texas branch of the congressional union for woman's suffrage. Sterling founded the Woman's Viewpoint in 1923. She felt that the world needed to see things through the eyes of women. The magazine was edited and written entirely by women and ran until 1927. Sterling served as president of the League of Women Voters in Houston from 1923 to 1925.[3] In the late 1920s, Sterling shared her home with Oveta Culp Hobby. They had been friends for several years. Sterling died in Houston on March 24, 1940, and was buried in Glenwood Cemetery.