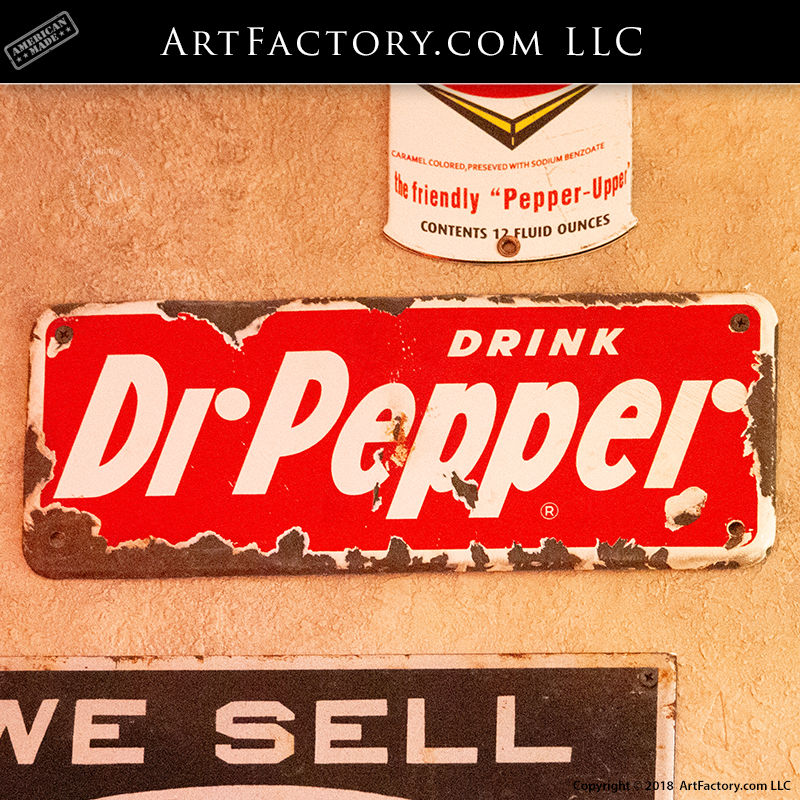 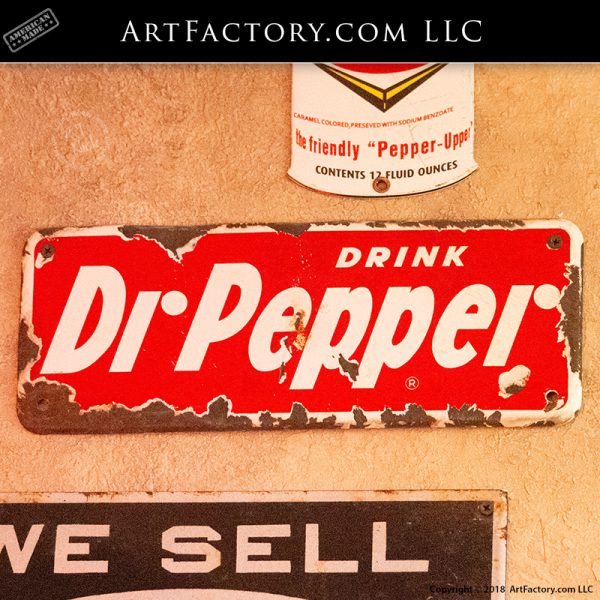 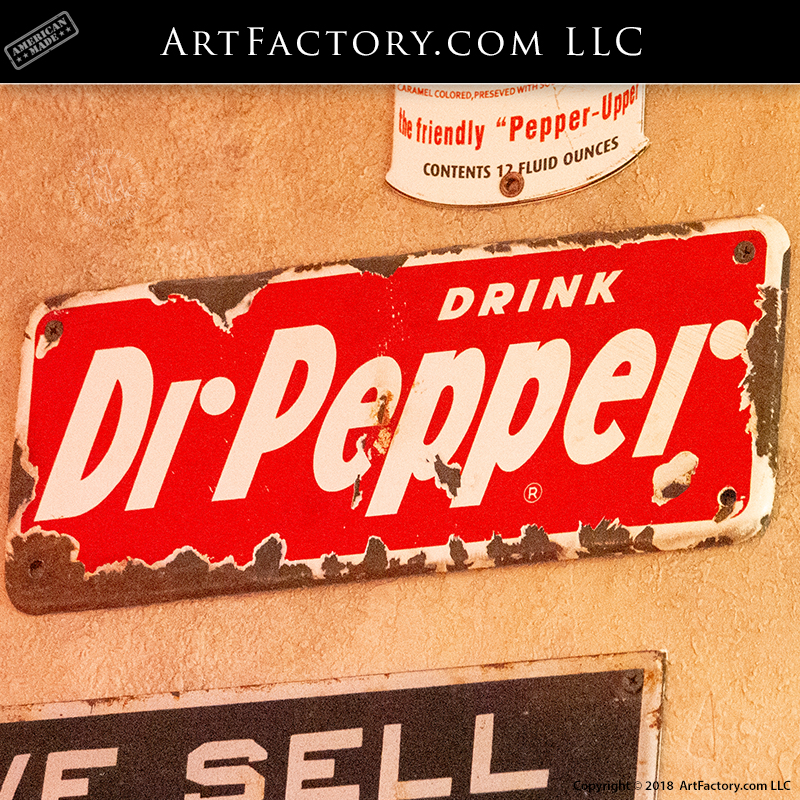 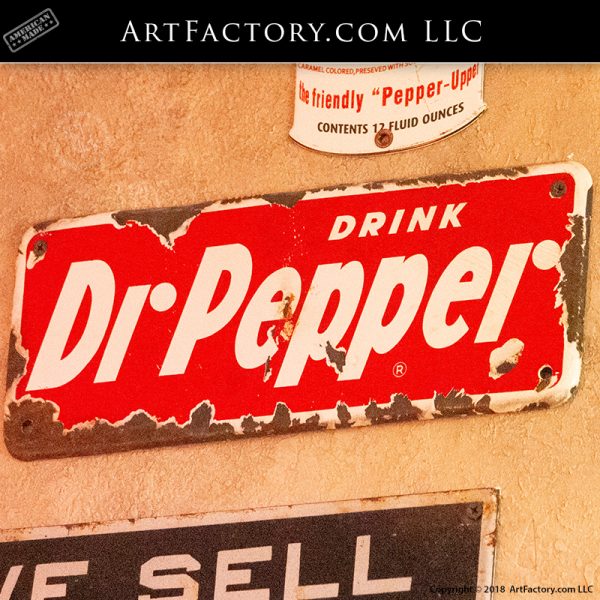 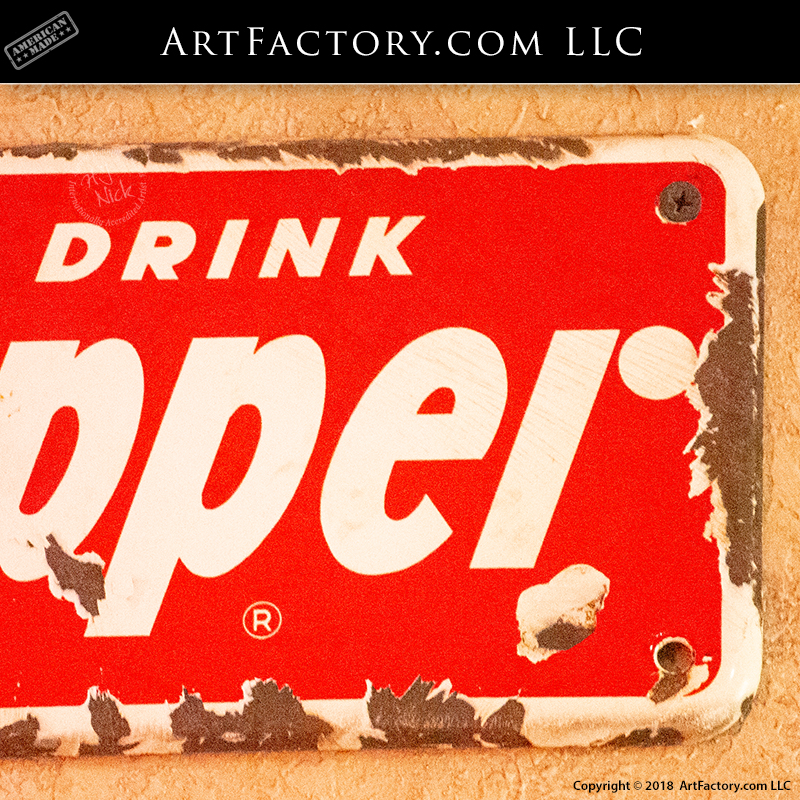 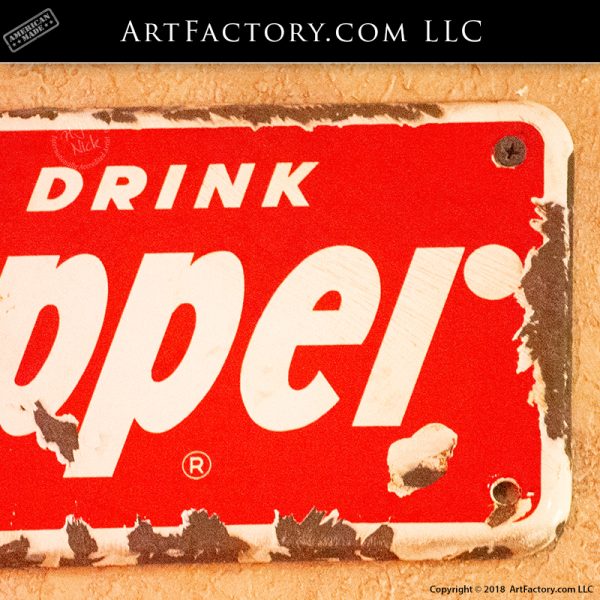 All vintage signs, antiques and collectables offered are genuine memorabilia and appreciable assets, not fake reproductions. All items are fine collectable art at the highest world class collector level.

The name "Dr. Pepper" was first used commercially in 1885. It was introduced nationally in the United States at the 1904 Louisiana Purchase Exposition as a new kind of soda pop, made with 23 flavors. Its introduction in 1885 preceded the introduction of Coca-Cola by one year. 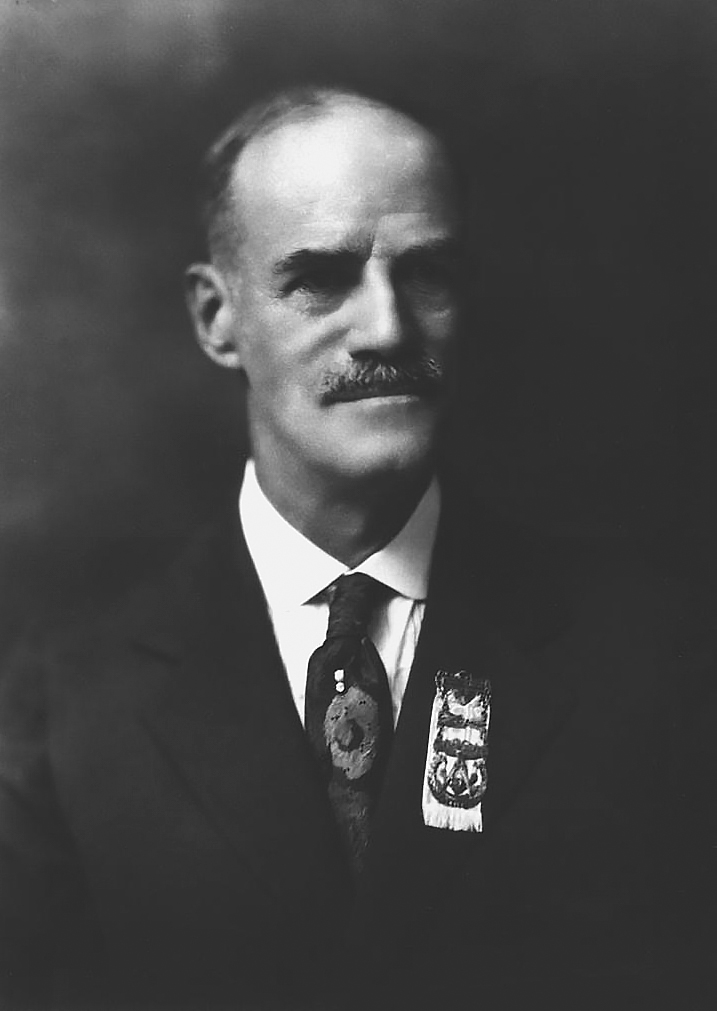 It was formulated by Brooklyn-born pharmacist Charles Alderton in Morrison's Old Corner Drug Store in Waco, Texas. To test his new drink, he first offered it to store owner Wade Morrison, who also found it to his liking. Patrons at Morrison's soda fountain soon learned of Alderton's new drink and began ordering a "Waco". Alderton gave the formula to Morrison, who named it Dr. Pepper (later stylized as "Dr Pepper").

As with Coca-Cola, the formula for Dr Pepper is a trade secret, and allegedly the recipe is kept as two halves in safe deposit boxes in two separate Dallas banks. A persistent rumor since the 1930s is that the drink contains prune juice, but the official Dr Pepper FAQ refutes this with "Dr Pepper is a unique blend of natural and artificial flavors; it does not contain prune juice."  The origin of the rumor is unknown; some believe it was started by a deliveryman for a competitor trying to cast aspersions based on prune juice's laxative effects, but it may simply be because many people feel that Dr Pepper tastes similar to prune juice.

Theories about the origins of the soft drink's name abound. One possible reason why the name was chosen was the practice, common at the time of the drink’s creation, of including Dr. in the names of products to convey the impression that they were healthful. 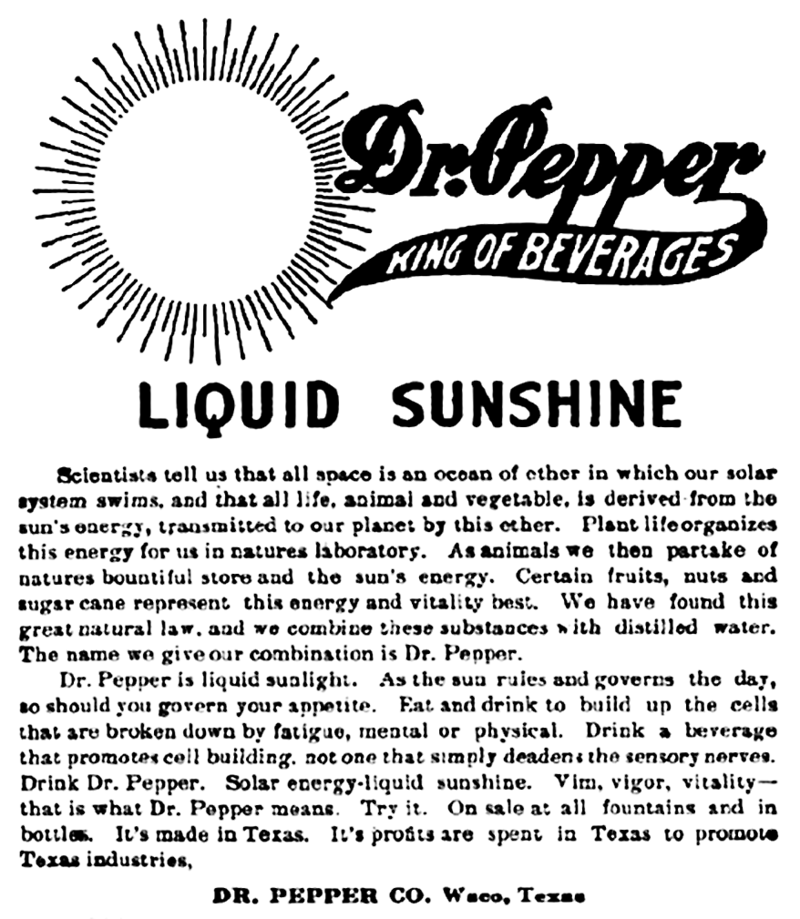 theory often cited is that the drink was named after an actual doctor, one Charles T. Pepper of Rural Retreat, Virginia. Morrison may have named the drink after the doctor in gratitude for Pepper having given Morrison his first job. However, Milly Walker, Collections Manager / Curator for the Dublin (Texas) Dr Pepper Bottling Co. Museum, has stated that U.S. Census records show that a young Morrison lived in Christiansburg, Virginia, 40 miles away from Rural Retreat, and that "there is not one piece of evidence that Morrison ever worked for Charles T. Pepper in Rural Retreat". Another story tells of Morrison naming the drink after Charles T. Pepper because the doctor granted Morrison permission to marry Pepper's daughter, but the girl in question was only eight years old at the time that Morrison moved to Waco.

A Dr. Pepper of Christiansburg is another possible inspiration for the soft drink's name. In the census that shows Morrison living in Christiansburg and working as a pharmacy clerk, a Dr. Pepper is recorded on a subsequent page. Since census takers at this time were walking from door to door, and these census entries are close to each other in the record, it appears that Morrison and this Dr. Pepper lived close to each other. Furthermore, Pepper is recorded as having a 16-year-old daughter, named Malinda or Malissa.

The period (full stop) after Dr was used intermittently in Dr Pepper logos until the 1950s, when, after some debate, it was discarded permanently, for stylistic and legibility reasons. A logo that debuted at that time had slanted text, in which Dr. resembled Di:. 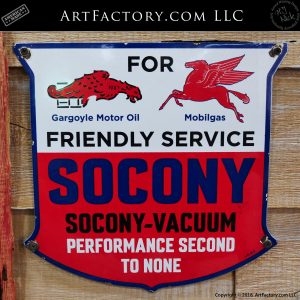