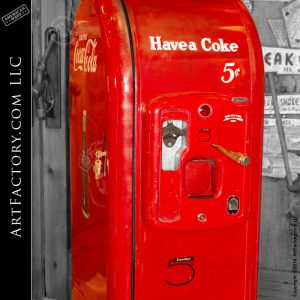 This is a complete, 1930s vintage Jacobs Coca-Cola 5 cent vending machine. This machine was produced by the Jacobs Company between the 1930's and 1940's. The Jacobs 26 bottle vendor is a highly sought after, and hard to find piece of Americana. This one is in great condition, complete, and working. The original drums for these machines alone are incredibly difficult to find. To find an all original, Coca-Cola 5 cent vending machine that is fully functional is truly extraordinary!

This machine is perfect for any retro-style man cave or game room. Treat your guests to a blast from the past, back when you could get a bottle of Coke for just a nickel. At ArtFactory.com we only sell original, museum quality collectibles, and our vintage products are backed by over a century of experience. Call us today at 1-800-292-0008 to get a quote on this vintage Jacobs Coca-Cola 5 cent vending machine, or any of our other world class quality vintage Americana and petroliana items. 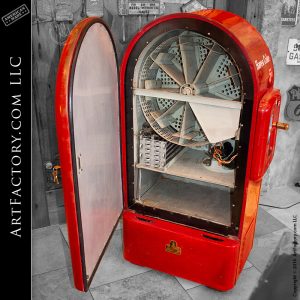 The first bottling of Coca-Cola occurred in Vicksburg, Mississippi, at the Biedenharn Candy Company in 1894.  The proprietor of the bottling works was Joseph A. Biedenharn. The original bottles were Hutchinson bottles, very different from the much later hobble-skirt design of 1915 now so familiar.

It was then a few years later that two entrepreneurs from Chattanooga, Tennessee, namely Benjamin F. Thomas and Joseph B. Whitehead, proposed the idea of bottling and were so persuasive that Candler signed a contract giving them control of the procedure for only one dollar. Candler never collected his dollar, but in 1899, Chattanooga became the site of the first Coca-Cola bottling company. Candler remained very content just selling his company's syrup. The loosely termed contract proved to be problematic for The Coca-Cola Company for decades to come. Legal matters were not helped by the decision of the bottlers to subcontract to other companies, effectively becoming parent bottlers. This contract specified that bottles would be sold at 5¢ each and had no fixed duration, leading to the fixed price of Coca-Cola from 1886 to 1959.

Read More At: Coca-Cola On Wikipedia